Mind the Gap: Rural Women’s Access to Mobile Technology and the Internet 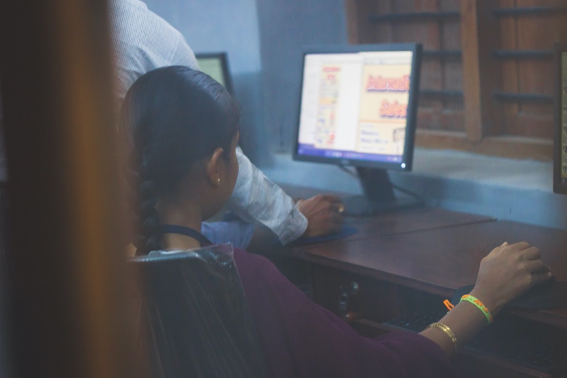 In our increasingly digital world, access to mobile technology and the internet is no longer optional. Over the last few years, broadband internet access has emerged as on-par with other public utilities such as water and electricity in its necessity to participate in the economy and society at-large. Digital payments and mobile money transactions are estimated to grow by 20% to a value of $135.2bn in 2023. And it is predicted that this year Indian internet users will spend, on average, 2 hours 44 minutes on mobile internet each day.

It is no secret that residents of India’s large urban centers have much more wide ranging access to internet services than those who reside in rural areas. While rural India has a higher overall number of internet users, only 22% of rural Indians had Internet access in contrast to 81% of those in urban areas.However,just as pervasive, and less widely-discussed, is the gender disparity in internet and mobile technology access. As more of our daily lives move online, women, and particularly those women in rural areas, are getting left behind.

Why does the gender gap exist?

As it currently stands, only 35% of India’s internet users are female. When examined through a specifically rural lens, this number only decreases. Part of this divide is correlated to a similar divide in access to mobile devices for women. While the majority of Indians access the internet through mobile devices and smartphones, a Gallup Poll estimated that 15% fewer women have any access to mobile devices. And even those women with mobile devices are less likely than their male counterparts to use them to access mobile internet. In response to COVID-19 lockdown measures and the growing availability of low-cost, internet-enabled mobile devices, more and more rural users have been able to move online over the last few months. However, cost and availability are not the only barriers keeping women from accessing mobile and internet services.

Traditional social norms play an outsized role in women’s specific lack of mobile internet access. In many rural families, traditional norms around women’s roles in the family structure are strictly adhered to. Because women are expected to assume the role of caretaker and homemaker for their husband and children, male family members see no need for women to access mobile phones and mobile internet. As a result, families often prioritize the purchase of mobile phones for husbands and male children. Women are thus forced to navigate patriarchal home structures in order to utilize family phones for activities beyond making basic texts and calls. Female children who are granted mobile access early in life, also frequently lose this access with the onset of puberty. A study conducted by USC on female mobile access concluded that fears of mobile internet interfering with females chastity and focus on caretaking activities leads to females use of mobile phones to sharply decline in comparison to that of male children around the age of 14. Closing the gender gap in women’s access to mobile phones and the internet will involve addressing both the physical and cultural barriers to access.

Why should we close the gap?

Closing the gender tech gap is one of the most urgent and important ways to improve the status of rural women. Women who are able to participate digitally are able to attain a higher level of education, become economic contributors and participate more actively in their communities. By closing the gap, we open the door to a new world of opportunities for rural women.

As COVID-19 continues to close schools and create barriers to traditional classroom learning, access to mobile internet is necessary for womens continued educational attainment. In households with only one internet-enabled device, a prioritization of male children increasingly stands in opposition to female children’s educational pursuits. By enabling equal access to mobile internet, female children and adolescent women will be able to actively participate in online learning forums and keep from falling behind.

Mobile ownership and internet access are also required to open a mobile money account and participate in digital payment transactions. These digital payments are considered more secure than cash transactions and their transaction history can now be used to qualify for credit. Armed with mobile internet, rural women have the ability to earn for their families, pursue entrepreneurial ventures and build their financial independence. Rural economies could be totally transformed through an increase in women’s access to mobile internet.

Finally, empowering women through mobile internet access has the ability to build stronger social bonds between women who are typically isolated from their communities. In traditional rural communities, women are forced to balance caretaking and earning responsibilities, often at the expense of their community social participation. Through widespread mobile internet access, women would gain access to online communities and social groups, enabling them to build bonds with other women regardless of their geographies. This would not only improve women’s mental health, but build stronger, more connected communities for both men and women.

It is therefore clear that we must ensure that more women are given the ability to take advantage of mobile phone and internet access. One notable outcome of the COVID-19 pandemic is the realization that unequal digital access has the ability to exacerbate existing societal inequalities to a new level. As digital spaces increasingly enhance and replace physical ones, it is more vital than ever women are given the access and knowledge necessary to fully partake in this transformation.