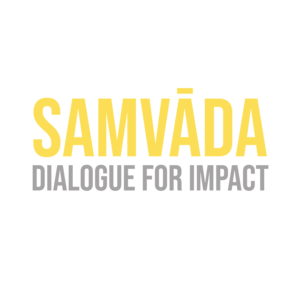 Impact organisations across the country are working towards achieving the UN Sustainable Development Goals 2030. Samvāda: Dialogue for Impact is an initiative by IndiVillage to facilitate dialogue, ideation, networking, and collaboration between impact organisations. The first Samvāda session was initiated in August 2019 and included participants from recognised organisations such as Ashoka Changemakers, Amani Institute as well a presentation from our own CEO Smita Malipatil. The sudden onset of the COVID-19 pandemic has increased the need for dialogue and learning between impact organisations as a way to cope with the increasing challenges. To support this need, Samvāda: Dialogue for Impact has decided to focus on ‘Problems and Solutions During the COVID Crisis in Rural India’ in the coming year.

Samvāda: Dialogue for Impact returned with its sixth event on Wednesday, 26th August on a virtual platform, to adapt to the current COVID predicament. The topic for the event was Community Outreach and Engagement. The Naz Foundation, Sneha Foundation and MYRADA participated as panelists in the event. The audience included members from organisations such as Head Held High Foundation, GoSports Foundation, Teach for India amongst others. All the participants of Samvāda were keen to learn about the different ongoing community outreach methods, techniques and innovative models that were used to support communities in the middle of this crisis.

One of the primary areas of focus for all the organisations was the dissemination of factual information regarding the pandemic amongst stakeholders as false information through various sources has resulted in inciting fear in the community. Participant organisations stressed on the need to counter the spread of fake news by sharing simplified content on the pandemic which includes proper hygienic practices to follow and immunity building mechanisms. This could be done through the use of WhatsApp, word of mouth and cluster based programs. Prior trust and relationship between the organisation and its stakeholders in a community plays a crucial role in the success of organisation’s information dissemination projects.

The sudden onset of the COVID-19 pandemic has forced organisations to reimagine their programs to support communities in this moment of crisis. While working on the field, an important aspect for organisations to consider is the safety of their field team. Along with the beneficiaries of the programs, the field teams of organisations were also oriented towards social distancing norms and practices to ensure their own safety in the face of this pandemic. The Naz Foundation specifically highlighted the importance of modelling as a technique to inculcate correct social distancing procedure and hygienic practices in the community.

With the announcement of the lockdown, all forms of life and activity in the community has come to a sudden halt. Schools are shut and people have lost their income and work. Adults and children find themselves forced to adapt to a new found reality. Organisations across the country have had to reinvent their programs to address the ongoing crisis.

In the initial stages, the priority of organisations was to distribute rations amongst their beneficiaries. Interesting work was done by MYRADA and Head Held High who used community centers as a medium to circulate information in the community, provide relief and connect individuals with government schemes. To keep children engaged, Sneha participated in UNICEF’s creative skills workshop. Children in the community performed different kinds of activities which included drawing, dressing up, dancing with their mothers amongst other activities. The idea behind this engagement was to help children feel a sense of security.  Similarly, IndiVillage also distributed learning packets to keep children engaged during lockdown.

Participant organisations also talked about their work towards supporting livelihood opportunities in the community. Instead of purchasing masks for its stakeholders, MYRADA engaged women of an SHG who stitched over 10,000 masks for them. This in turn kept the SHG members engaged, in a time when federation meetings were not possible, and allowed for them to continue earning. Similarly, Head Held High also developed livelihood opportunities for women in the community. They had women make leaf plates and masks. They created market linkages so that the women would be able to sell their produce and earn an income.

Head Held High shared data from a survey that they conducted amongst migrant workers which revealed that 60% of migrant workers would choose to not return to the cities following their ordeal. This along with inputs from the other panelists reveals the need for developing income earning strategies and social enterprises in rural india.

There are many synergies in the operations of impact organisations in the country during this period. All organisations are adapting towards a new reality, one which has forced the use of technology. However, this also has some advantages because it allows for networking, ideation and collaboration between organisations across the country. Partnerships and collaborations between different NGOs or NGOs and the government may be the answer to solving the several challenges that are currently plaguing the country.

Tell us how you have been engaging your community stakeholders. Write to us at samvada@indivillage.com or connect with us on any one of our social media channels.